I'm working on an update to this after realizing that, since the width increases at the same speed as the length, you'll end up with almost a square if the piece gets anywhere near the size of a normal afghan. Of course, this might work well for a lapghan...

I found a really nice-looking afghan online based on the wheel stitch, but the afghan was square. I made one in baby size for a present, which you can see in a previous post here.

In some cases, a square afghan or blanket is just what you need, but there are times you want a rectangular one, right?. I liked the wheel stitch, so I decided to write out a pattern for a rectangular afghan using this stitch. I haven't completed the afghan yet, but I will share my progress as it goes along.

Here's what I've come up with so far with some pictures to help you along the way:

Wheel Stitch Afghan
© 2009 Gene Saunders, a.k.a. CrochetDad
Do not redistribute without permission. You may post a link to this article, but don't copy it and call it your own. Thanks!

For yarn, I'm using Red Heart Super Saver in several colors (actually, I'm starting with the left-over yarn from the Baby Blanket I made. The colors are six shades of blue, white, buff and burgundy. You can make this afghan with as little as one color - I'll tell you later how to use only one color without cutting the yarn...

Hook size will depend on the yarn you use and how tight or loose you want the stitches to look. 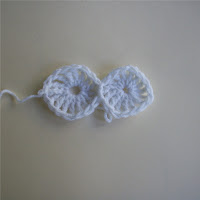 Rnd 2: This round is the first half of the wheel stitch. It takes two rounds to complete the stitch.

(Note: If you are doing this in one color, sl st in next 3 sts, then continue with the next ch 3)

Change color, join yarn in top of first trc, ch 3, [yo twice, bptrc in next st, reserving last loop on hook] 4 times, (5 loops on hook) yo and pull through all loops, ch 1 (CornerCluster made). The ch 1 will be referred to later as the “shell anchor” later. Here's what you should have: 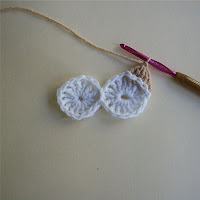 Now ch 3, and sl st under loops of current st and next st, like this: 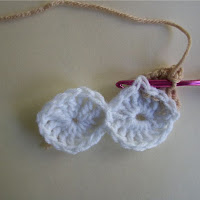 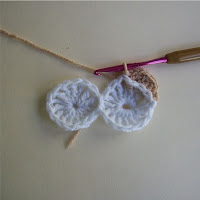 ch 3, [yo twice, bptrc in next st, reserving last loop on hook] 6 times, yo and pull through all loops on hook, ch 1 (SideCluster made) (again, the ch 1 is the "shell anchor" for the next round). Here's what mine looks like at this point: 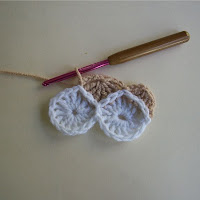 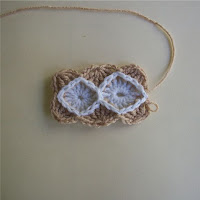 This is the second half of the Wheel Stitch and you'll be staying with the same color as round 2.

10 bptrc in shell anchor (remember, it's the anchor stitch of the previous round's CornerCluster), sl st in next st (CornerShell made). 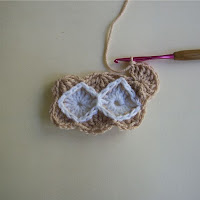 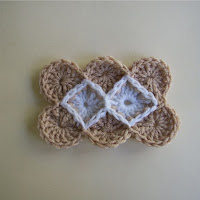 ..
Continue by repeating Rnd 2 and Rnd 3 with color changes on even rounds. 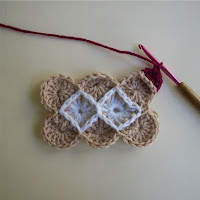 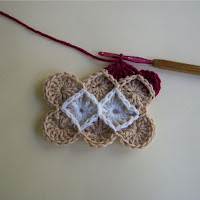 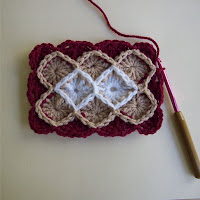 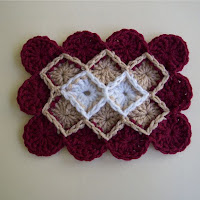 Here's what I have so far: 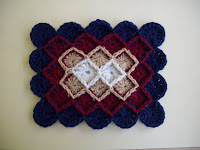 When I get further along, I'll show you how I do the border (we'll end with an even round).

Posted by CrochetDad at 6:42 PM

Very interesting idea. I love your work and follow your work often.

I can't wait to see how this finishes out. Goldiepel

Great idea. I love it!!! Would you mind if I share a link to your blog post on my crochet blog and on my FaceBook page? People are always looking for different shapes for a pattern stitches.

I would be honored. I started this stitch because of your blog entry. Thanks so much for the inspiration and the video!

I'm going to rethink the foundation, though. I was reminded by another online crocheter that as the afghan progresses, the short dimension will increase at the same rate as the long dimension, ending up nearly square, anyway if it gets much bigger. It started twice as long as wide (2 inches by 4 inches) and now it's approximately 10 inches by 12 inches. When the width reaches 30 inches, the length will only be 32 inches, which is not what I had in mind...

I'm going to start it over as a tutorial.

Holy Cow! That's incredible! I keep looking at it and I just can't seem to get it thru my head that the circles aren't done completely first and then joined as opposed to 1/2 at a time. Mindblowing! Really nice work!

I love what you did with this stitch! Very pretty. I follow Teresa in Youtube... I love what both of you do with the crochet. I have been crocheting for 30 years and still get excited when I see new ways to use stitches :)

I don't know if this would work here but when you braid rugs, to get your beginning braid length, you subtract your finished rug measurements and start with that length. In other words (easier I hope!), if you wanted a 5'x8' rug, you subtract the 5' from 8' which is 3'. You use a 3' length braid as your beginning row and then you continually braid around it until you have reached 5x8. I wonder if this concept would work for your afghan? Say you wanted an afgan that measures 40" x 60"...you would start your first row/round at 20" long. Again, I don't know if this would work but you could try a sample and see if the proportions remained consistent.

Thanks, Kate - this information has been passed to me before. I'm working on another with the proper starting length.

So in round three when you say to do 10 BPTC in the anchor stitch, are you just talking about the slip stitch you did at the top of your corner cluster? or the chain 3 space?
And when you move on to the side cluster do you do a slip stitch before you work on the BPTC?

I love how this blanket looks!
Thanks so much for posting it

In round 3, the "anchor stitch" referred to is the ch 1 space in Rnd 2 after the cluster stitch.

Yes, join to the next stitch with a slip stitch before moving on to the next side cluster. (I've corrected that omission in the text) - thanks for pointing that out.

So it should read:

thank you so much. My mum showed me this pattern many years ago, but the pattern was never written down. She has passed away now and I would love to make this again. I have posted my rug on Ravelry, as mums unknown pattern, and would like to link to your page with the pattern if this is OK. Again, many thanks

That would be wonderful, thanks.

What a wonderful idea!! I definitely will be trying this out when I throw my Summer Party this year! ♥

I added this project and thumbnail to our site and linked to you. We are looking for more afghan project as well as other projects, so if you have any similar projects please feel free to let me know.
Julia
jlitz@primecp.com
Editor, www.AllFreeCrochetAfghanPatterns.com

This is the first time i am reading your post and admire that you posted article which gives users lot of information regarding particular topic. Thanks for this share

That was alluring! Thanks for the extent interpretation! I even did an appraisal on my website! Why am I using squeal script everywhere!

With out doubt, I will visit this site again. It is perfect site to obtain source because the information is outburst. This is what I really like in a site, very informative, no waste of time on reading.

I'm way behind on thanking everyone, so this will have to do for all of you who have commented on my tutorial: Thanks very much.

I am so grateful I found your blog page, Really its remarkable. You have some great content but are getting lots of none relevant comments here too.Ventilatoren

WOW!This is cool. Scanned through the pattern. Not sure if I will attempt it any time soon, but my hat is off to you this is great.Haven't had a chance to read through your blog, but I will..Your good...

You're very kind - thanks!

Thank you for this pattern. I did link to this on my personal blog, but also adapted it just a little to work for my curtain tiebacks, I do hope that is ok...Chapstick Goddess (http://cbrown2000.wordpress.com/2013/03/25/crochet-curtain-tiebacks/)

I'm glad you could adapt this technique to your own needs. Thanks for the link back.

I found your blog via the Crochet Geek as she had a link for your rectangular Wheel stitch patter...I wondered if you ever finished off/adapted the attached photo to see what size it turned out to be. Would love to know if you did and if not what suggestions you might have to finishing out this pattern and size. I'm looking to make an afghan but do not want it to end up square like Theresa's.

Any input or advice would be much appreciated! Thanks, Brady.

I'm an experienced hooker and I can't for the life of me figure out the foundation. If I chains 12...7 TRC in the 4th and skip 4 and slip stitch...I have 3 left...so how do I skip 4. Lol. I'm so confused and I sooooooo wanna make this.

Heather, wow! I can't believe no one has found this error before this. My error: I should have said "chain 14..." Hope this helps.

To get the proper dimensions at the end of this project, you'll have to start with the proper foundation round. Subtract the desired width from the desired length in inches. Multiply the result by the diameter of "one" starting motif. This will give you the number of starting motifs. My next blog entry explain this slightly. http://crochetdad.blogspot.com/2009/08/rectangular-wheel-stitch-afghan.html

Widgets for Etsy Sellers
Powered By

CrochetDad
Temecula, Southern California, United States
The repetitive actions needed for knitting and crochet can bring the mind and body to a state called a "relaxation response" that is quite similar to what people experience with techniques such as repetitive prayer, yoga, meditation, Tai Chi, and other relaxation disciplines. Research at the Harvard Medical School Mind/Body Institute has found that when an individual is crocheting (or knitting) his/her heart rate can drop 11 beats a minute and his/her blood pressure drops as well. These results can have significant health benefits for people who knit and crochet. Therefore, I am a man who crochets. I design my own crochet and sell patterns and finished projects. 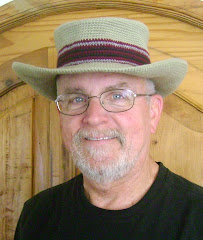